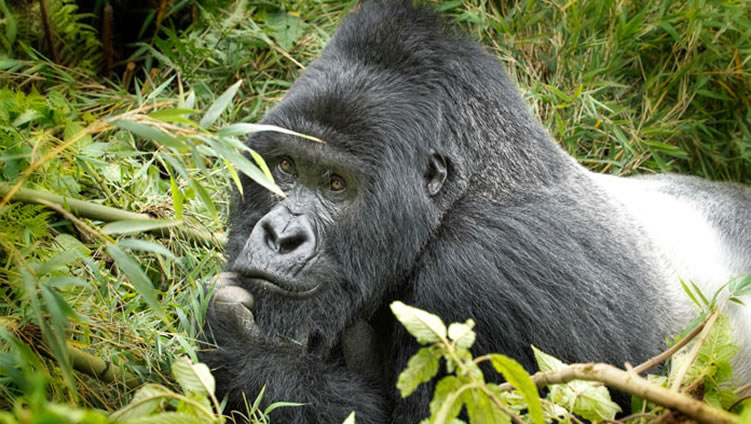 Volcanoes National Park in the southwestern park of Rwanda is known by most tourists as the best destination for tourists interested in Rwanda gorilla safaris which include visiting mountain gorillas in their natural habitat.

The nation had 480 of these extremely amazing and rare primates according to the last gorilla census in 2010. Just some days back, Rwanda marked the eleventh Kwita Izina function where 24 baby gorillas were named, an event that attracted thousands of guests from different parts of the world.

Volcanoes National park is located in the northwestern part of the country at approximately 2 hour drive from the Kigali the capital of Rwanda. We depart from Kigali Serena Hotel at 6:30am in the morning and continued to the southwestern part of the country in the frosty morning weather. Everybody was going to, school children going to school while other local people were already in their gardens digging.

From far off, once volcanic mountains Bisongwe, Sabyinyo, and Karisimbi could surely be seen. Our next stop was at the headquarters of Kinigi Park where every trekker gets clearance and guidelines on visiting these amazing primates in their natural habitat.

Trekking mountain is often done in the morning so a good number of visitors had reached when we arrived. Here we waited a while, as traditional dancers entertained us.

Moments after, we were introduced to Nkurunziza Placide Niragire, the tour guide.

He let us know that gorillas have a gestation period of 8.5 months. A male gorilla at the age 8-12, they are dark backs and from 12 years on, male gorilla develop a silver linning on their backs and this is the reason they are called ‘silver backs’.

At Volcanoes National Park Headquarters, tourists are encouraged to rent hiking boots and raincoats in case they didn’t move with them. In the jungle, it’s generally wet, sloppy and also cold. The advices are to enable the tourist have an awesome trekking experience.

At our next stop we get off from the vehicle and the time had come to trek in the jungle. Here, potters were available to help us heavy trekking gear.

The guide then told us that we were about 30minutes from the park. For anybody on their maiden trek, the climbing can truly be tiring. In spite of having been given walking sticks, we made a few stops in the jungle to catch some breath. At the entrance of the park, we got reminded of the dos and don’ts once we got in contact with the mountain gorillas in the jungle.

Rules and regulations while with the gorillas in the jungle
We were told mountain gorillas don’t like sticks, as they were regularly used by poachers. You are additionally encouraged to keep no less than 7 meters away from them. These creatures share almost 90% genes with people so odds of contracting illness from them are high.

“When they charge, they need you to submit so you may squat. When they get furious and begin thumping their chests, you ought to murmur back. In the event that you see it strolling to you, don’t show your back, yet rather walk in reverse” our guide forewarned us.

Likewise, while you’re taking photographs of mountain gorillas, you should be mindful not to use flashlight since they don’t like it.

Face to face with the gorillas
After about 2 – 3 hours of hiking in the jungle, we at long last got in contact with our long waited human like creatures.

We could see two gorillas continuing with their day to day work and feeding on the bushes. As we moved closer, others started emerging from the bushes.

Mountain gorillas spend most of the time alternating between feeding, battling for their young ones and scratching their hairy bodies.

Other gorillas could be seen on trees and branches and swinging. The national park has over 200 species of plant most of which are food to these amazing primates. Most of these plants are rich in water and that is how the mountain gorillas keep hydrated. Fortunately for the 1 hour we spent with the mountain gorillas in their habitat, none of them showed irritation.

Volcanoes National Park has over 10 different habituated gorilla families which were made by part. At the point when a male is not contended with the goings on, it parts away from the family and runs with a female. 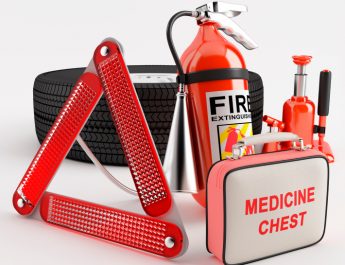 Most important things you must have in your vehicle 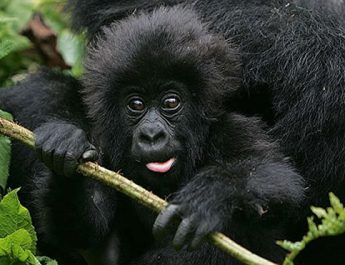 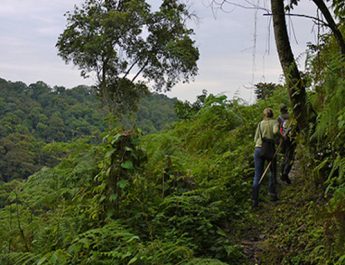 Nyungwe Forest: A Must Visit for Chimps & Other Primates